Today I built couple of TV antenna's for some of the people in town that have bought TV's. 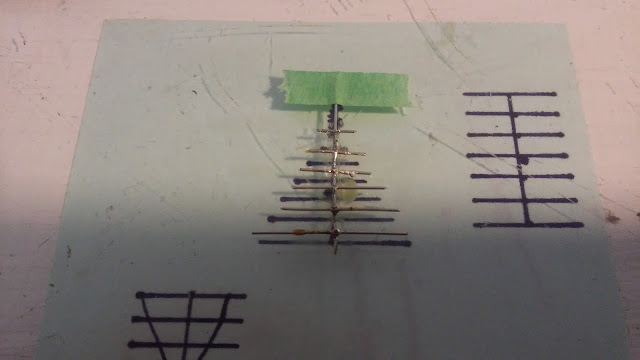 I tried first gluing the arms to the center piece with CA but as per usual CA only works when it wants to...fail. I then decided to just solder them all together which really worked much better. I put some resin flux on the center piece and tinned it, then tinned the 6 arms that attach to the center. Gave them a touch with the iron and they attached easily. You can only add heat for a couple of seconds or the others ones will come loose. No need to paint as this is a natural colour. The wire is .015 and the pole is .02. You can see from the picture the other patterns I drew out. The patterns are sitting under the glass on my desk. This antenna is scale 5' long. I then took the house drilled a hole on the roof. Before I installed the antenna I cut a small piece 1ft sq out of tin foil and slid that up the stand to act as a mounting base of the antenna. It is just from memory, I know there could be guy wires but that would be just to pidly for the effect I wanted. 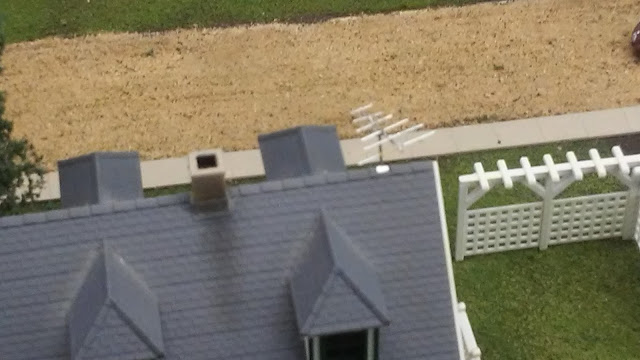 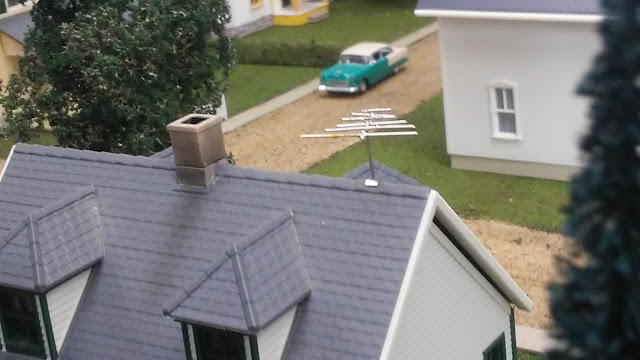 I think it looks pretty good. I had to really zoom in so you could see it. When looking at it from a couple of feet away it is hard to tell any of the arms are bent at all. I will give 4 or 5 out of my 11 houses some form of these. It is hard to find how many people would have had TV in 1959 in Sask. and that is when I was born so no memory there. The first one took 75min but any of the next ones now would only take about 15 or so. It is a nice quick little project.
on November 25, 2017