Van Hobbies CNR U-1-f Mountain. This model came from the last run and has a coaster drive, factory paint, raised numbers on running boards, back head detail. I installed a Soundtraxx 750 Medium steam decoder in this locomotive in 2014. This was a difficult install only because of the factory paint. I gave a lot of thought to this and had to consult Wayne in Ontario on how to get the ash panels, and smoke box cover off without scratching the paint. The ash panels fit very tight and have to be removed to get the shell off. It takes a leap of faith to pry them off without doing any damage to the paint or the brass parts. I managed to remove the front of the smoke box and could install the decoder in that space. While I had this open I installed an LED light. I ran the wires back to the motor and pickups from the tender and the loco. Next I had to find a place for the speaker. I could not place it in the tender, mostly because it is an oil Vanderbuilt and only had a 1/4" slot in the bottom of the tender to get a speaker inside and then there would be no way for the sound to get out.   It would have been very difficult to remove the plate from the bottom of the tender without doing damage to the paint. I chose to install a mini oval speaker in the floor of the cab which works well as it turned out because you can't really see it.
This loco runs really nice but did have some problems with the front and rear trucks that like to short on curves. A lot of time was spent on trying to fix the problems.  In the end the spring for the trailing  truck took off when I was taking it apart and in the moment I didn't feel like making a new one. I put the truck back on and  turned the screw in so that the truck was not tight and gave it a try. Well guess what it worked just fine and it is the best it has ever run. I took the screw back off and put a little white glue on it to hold it in place. By having the spring removed it also changed the balance and it pulls much better now. The front truck ended up with a lighter spring as it was lifting the front drivers off the track, with the lighter spring the shorting went away. This is all part of running brass steam and you have to stay diligent until you get the problems fixed. It will still take some maintenance to keep it from shorting by adding lacquer nail polish as the paint wears off and bare brass gets exposed.

Here are some shots of it pulling train #62 Yorkton to Regina just leaving Melville. It is entering the end of it's career and is on less important runs now. It is pulling a box baggage, reefer, and a coach.

Taken from the roof of the Hudson Bay store 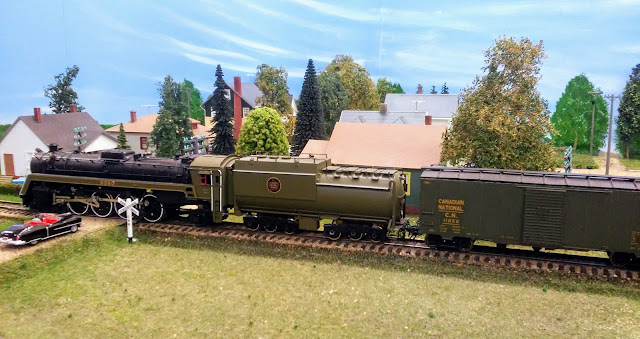 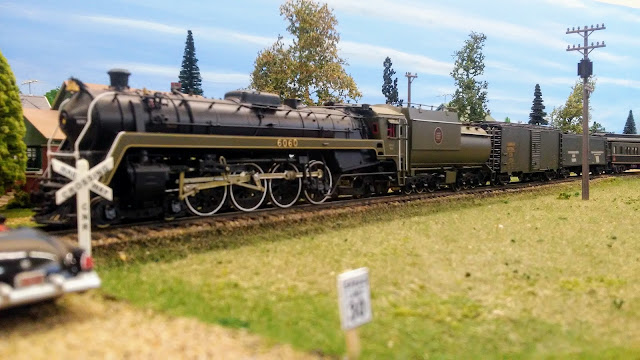 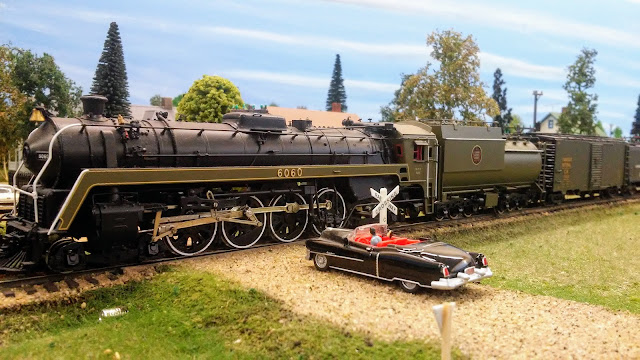 Email ThisBlogThis!Share to TwitterShare to FacebookShare to Pinterest
Labels: Locomotives