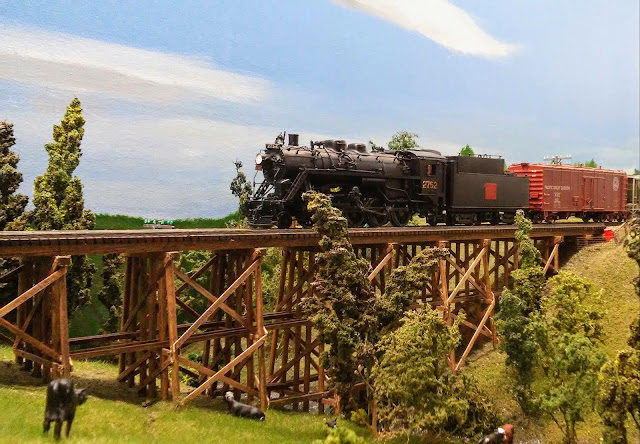 I scratch built this from CN plans that came in a bundle from the CN Lines. The bridge is a wood deck 174' long and 36' high. When you come down the stairs in to the basement this bridge and the associated scene is the first thing you see.This type of bridge was relatively common in the prairies, although there are many different types.They usually cross some type of small creek or river.

This bridge is built from scale wood from Northeastern and Kapple. I used the drawings and some pictures that I had taken of similar bridges. I used the pictures for for details that the plans didn’t show. I partially drew it out in Cad so I knew what it would take to cover the span.

I laid the cork road bed up to were I wanted the bridge to start on both sides. I then laid a piece of wood the same depth as the deck would be across the span. From this I could tell were the bents would be placed and how long they would be. This also gave me the opportunity to mark out the creek. It also gave the opportunity to check this against my drawing and make the changes needed.
Then I created some other drawings in Cad to use as gluing templates for the deck and the bents. The wood was all stained before I started the build. I then taped wax paper over the printed paper so the wood glue would not stick. I assembled the deck and bulkhead and then set it in place to ensure the length and height was right and it also made it possible to measure and check the height against the numbers I had in the CAD drawing. The ME bridge tie strip was then cut and glued to the deck and was put in place and checked again. The deck on its own was remarkably strong without the bents. The bents were built and the bolts added to the bracing. I then glued the bents to the deck. This was done with the deck upside down. I had to build some clamps the would hold the bent straight until the glue dried. The bent main posts were left intentionally a little long Once all the bents were glued on the bridge was put back in place and the spots were marked where the posts touched the scenery. I put a little bit of lipstick on the end of each post which left a mark easily. I didn't care if it was on the end of the post because it would be buried in the scenery, then I drill holes in these spots for the posts to slip into.
Once all this was done the bridge was removed and replaced a few times as the contours for the scenery were touched up. What I should have done was finish all the ground cover in this area first before installing the bridge permanently because it was hard to work under the bridge once it was installed.

I add then added the main rails code 83 and the guard rails down the middle using code 70 ME rail and glued them in place. 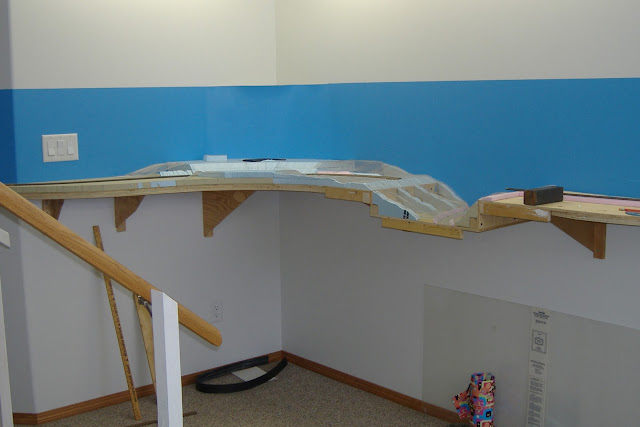 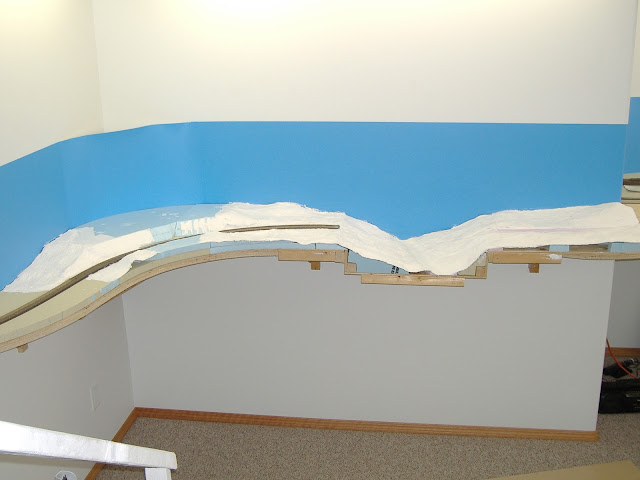 This was taken Jan 8 2008. It is just sitting in place with the holes drilled for the bents. 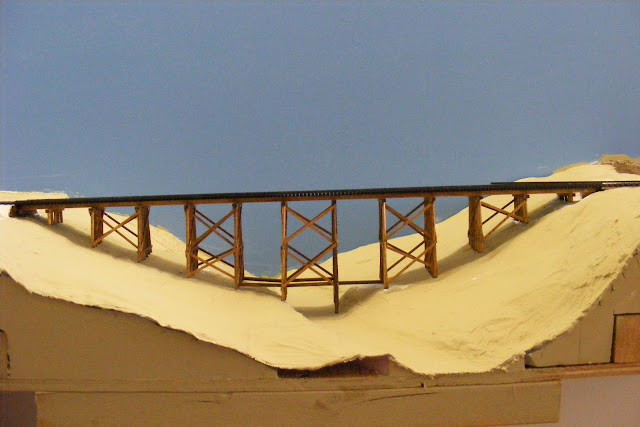 Oct 28 2008. It has been installed permanently by this point and the rails are in place 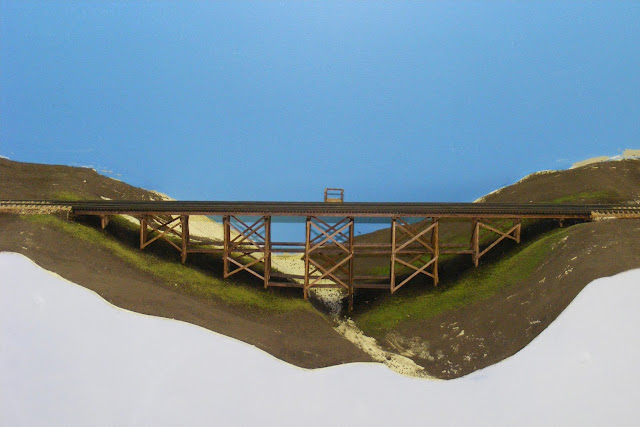 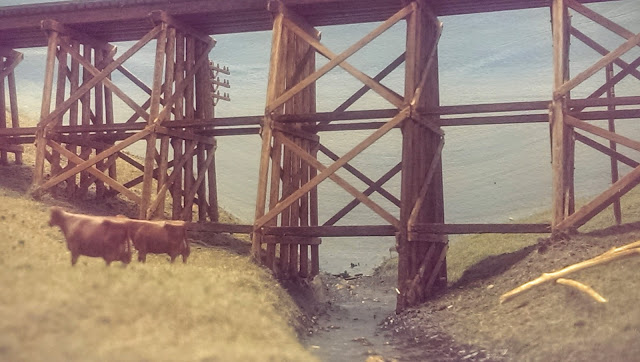 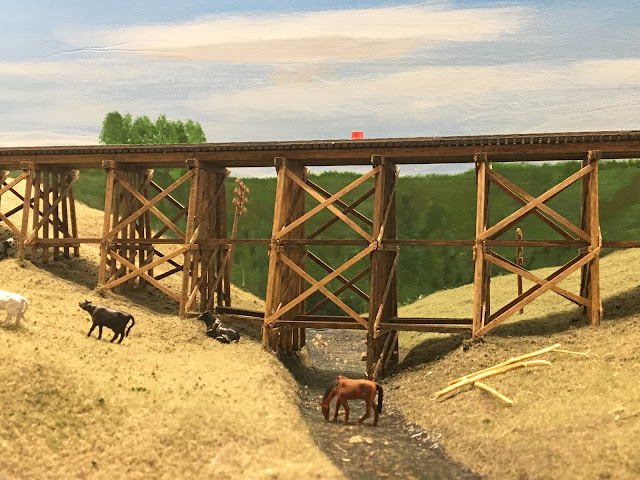 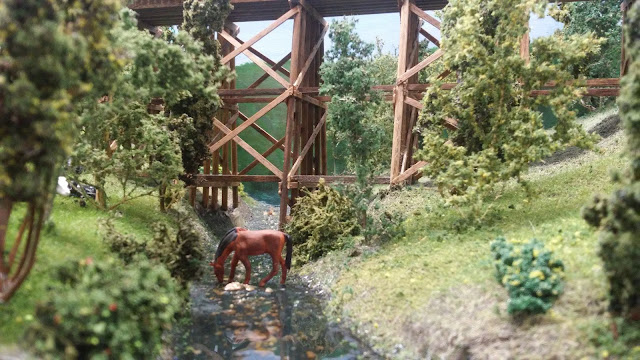 A car derailed on train 202 to Regina and took out part the safety stand and a repair crew had to come out and fix it. Thus the new wood. 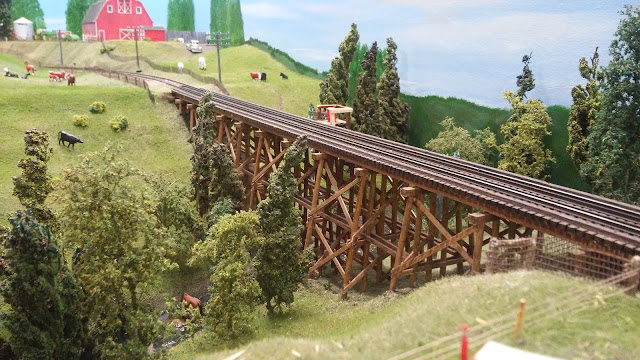 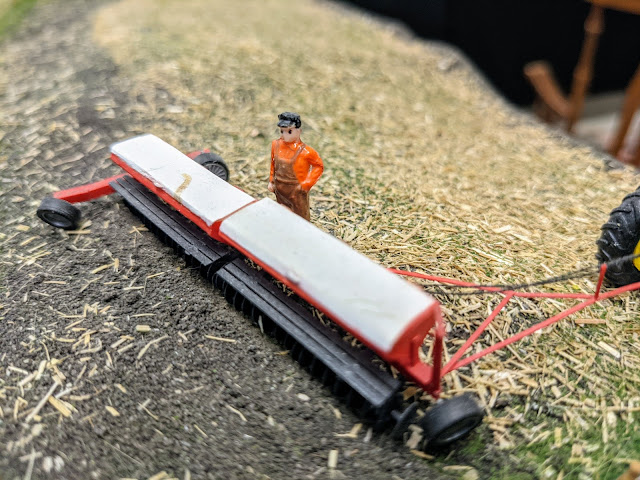