As I am working my way around my layout finishing the scenery from the small shelf up to Waldron. Waldron has two elevators a P&H and a National that I have to complete by adding the driveways and some other details. I thought I would give a post on these as they get completed. I  finished the CAD drawings for the driveways.
Here is a picture of what they are or have been for a while. I didn't get the rest of the building built because at the time I at least wanted the main body modelled so that a train passed something. You see that the National has a square false front which really was not that common. The National decal was custom made and the decal for the P&H came from a Microscale set. Other details of note are the wood roof hatches. Agents would shovel the dust that accumulated on the floor at the top of the leg where the distributor was out this opening. On the National there are some singles that have been patched. I put a piece of tape over that section of shingles before I air brushed the weathering on the rest of the shingles. The body colour is light iron oxide which was used a lot because it was cheap and held its colour well. To paint an elevator today it would cost $$$$. This scene is loosely based on Ernfold Saskatchewan were the track went through a similar kind of cut so the entry to the driveway was at ground level which is not very typical in Western Canada but is more common in the US. 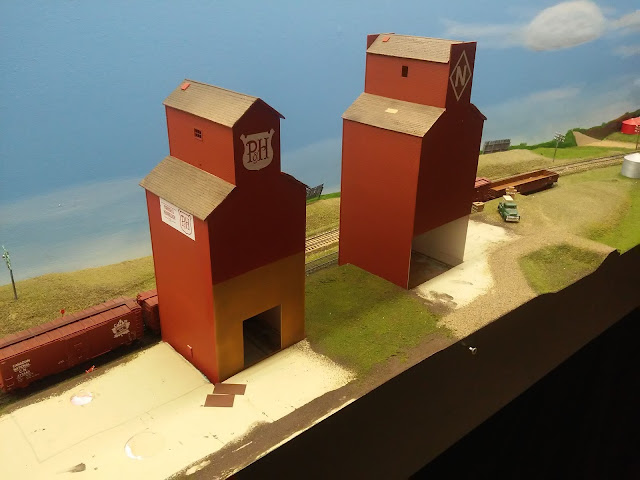 Here is a picture of the back side. The only disadvantage to having the elevators set up like this is uncoupling cars can be a bit of a challenge but it does put the driveways next to the isle. You can see the folding platform that is at door level with the car. The rail above that is the track for the doors. 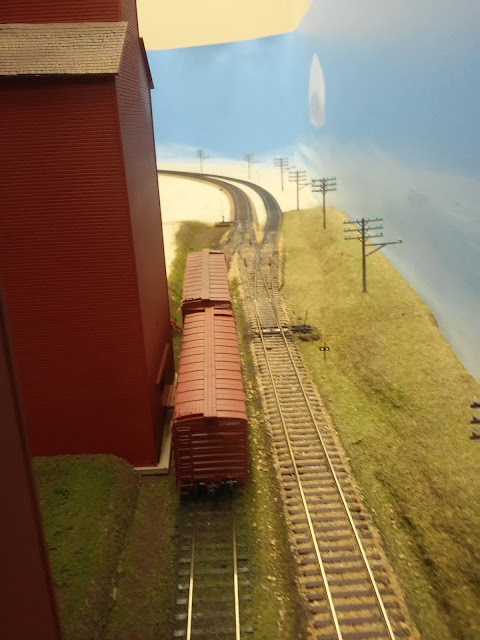 Here is what my cad drawing for the driveway looks like. Some of the parts on the right are for an extension that you see on some driveways and will be on my next elevator. My drawings are not meant to be professional as they are not for sale. 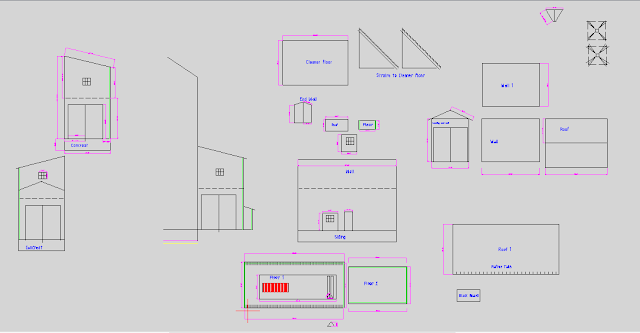 Here are the pieces laid out after being cut out. Going clock wise from the top left. The paper cut out for the back hopper, the black piece is the 4'x8' chalk board, the driveway floor with the metal slats installed over the unloading pit, the doors for driveway entry at both ends, the roof for the little extension next to the scale and the driveway roof panel with the paper with the shingles line glued to it. The same is on the little roof. The stick on the little roof I glued on so I had a handel when I was spraying the styrene with glue befor attaching the paper. 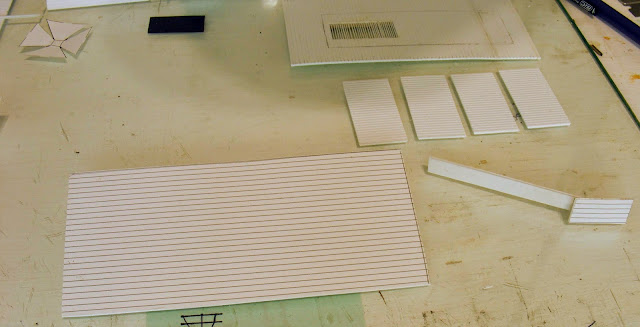 This picture shows the outside wall for the driveway with the man door and extension installed, the back hopper and the template that it was cut out from, the front leg from the unloading pit, the end walls of the driveway and the center section that has the hole for the leg and the walls for the bins. 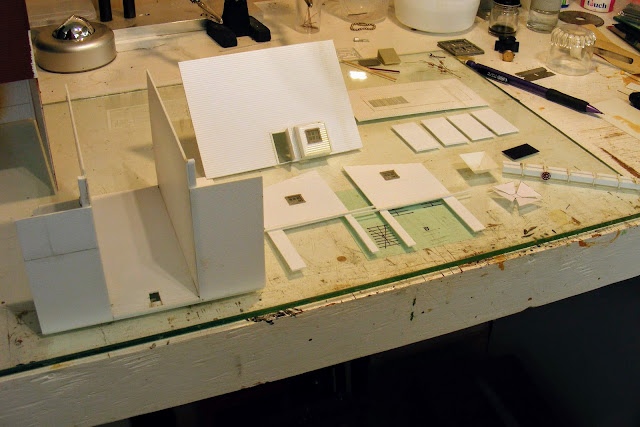 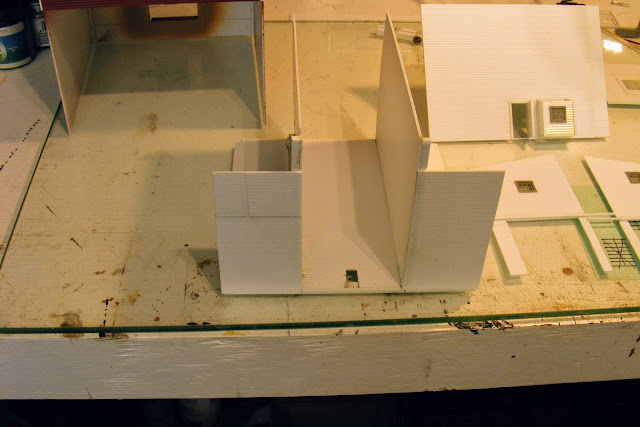 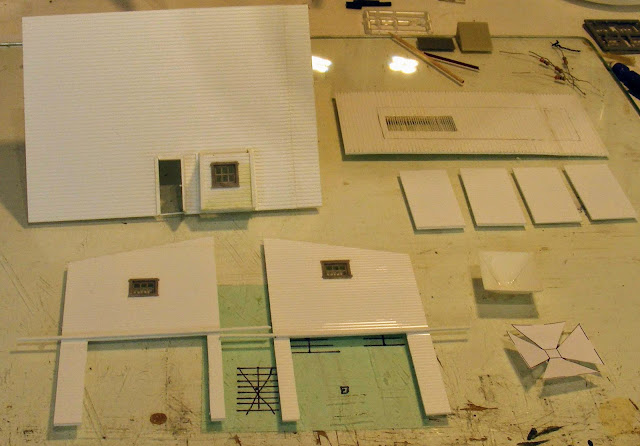 So I drew out the hopper in CAD, printed it, cut it out and glued it to .01 styrene sheet and cut it out. Then folded the hopper and glue it together one side at a time. I also then added a scale 12" high extension to the top of the hopper that is not shown. I just cut out another paper to show what it would have looked like. The one that was glued to the styrene is lost when I wash it off. 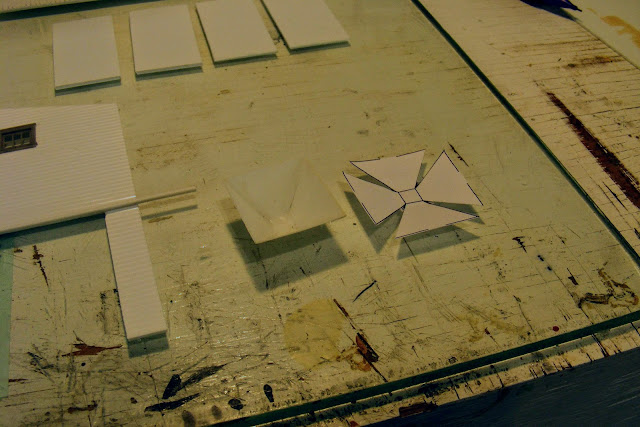 In the next post I will show the painted, shingled and partially assembled parts along with other details. 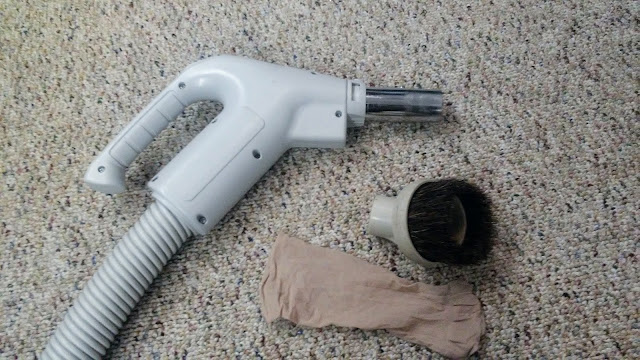