I scratch built this from CNR plans with modeller liberties.These plans came in a bundle from the CN Lines. I drew up the tower on my Cad program. I draw in Cad at 1:1 and then I printed it off at scale. See How I scratch build At the time there were no kits or plans for wood towers for CN coal towers that I could find. There was a nice kit made by Kanamodels although they have closed their business. I do not have any pictures during construction as I didn't take many of those pictures back when I was building this structure.
This is built from styrene except for the wood retaining wall. This dock is at the end of it's life and will be retired in 2 more years with the end of steam.

This is a view looking back from the ash pit on the west side of the yard. 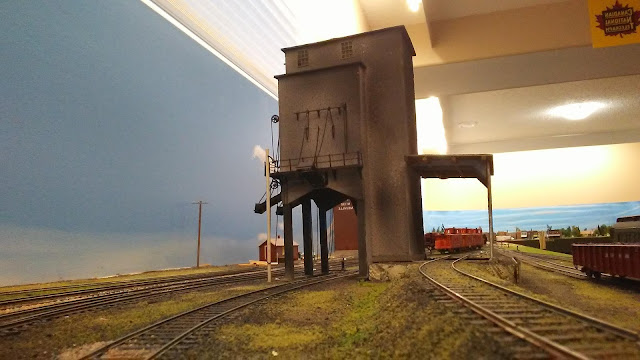 The CNR plans were for a 300 ton 3 track plant. When I drew it up I cut it down to only a 150 ton with two tracks because of space restrictions. In the plan there would have been 2 tracks going underneath the tower. The model is build from styrene sheet and some wood 12x12 beams on the roof of the unloading shed and the retaining wall. There is also steel supports that hold the beams in the roof in place.The stucco is made using the same methods as I used for the 2nd class station. The roof tops are sandpaper representing a tared roof. The doors, windows,walkway railings, chain drives and coal chutes are Tichy. The windows were reworked a bit to be more accurate for CN. There are little cleats on the concrete pillars to tie back the chains. The unloading grating was built from some screen that I had around and I added 2"x12" planks to it so workers could walk on it to open chutes on the cars. The upper walkway grating is from Plano and the chain is from A-line. There is a light in the unloading bay and on the poles at the outside corners of the walkways using SMD LEDs. The track to the unloading bay and under the tower is code 55. The rail on the outside chutes is code 70 same is in the yard tracks. I then did weathering on it using my air brush and chalks. Not really too tough a build except for getting slops on the hoppers right on the bottom of the tower and the unloading hopper. The structure was formed from .04 plain styrene and some tubing for the hopper concrete posts. The raised ground level for the pit was made using foam insulation. This model has to be movable so that I can access the track work behind it if repairs are necessary. I have not yet completed the scenery behind it including painting the backdrop.

This view shows the unloading pit. There are planks 2"x12" that are movable for the workers to walk on to get out to open chutes on the hopper cars and the grating spacing is closer on the left side. There is also a pit under the grating. 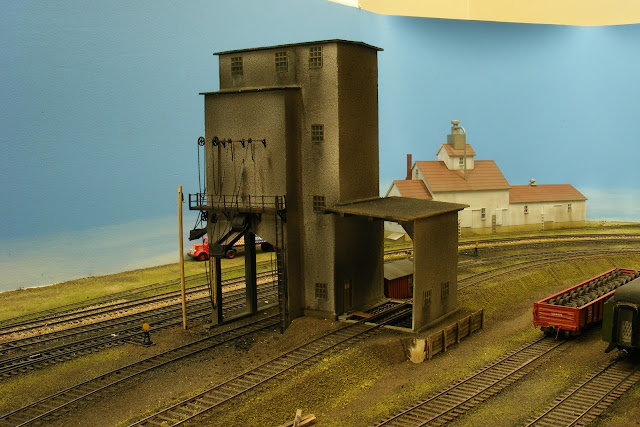 This is looking at the entrance to unloading from the east. The rise from grade to pit level is 5'. The unloading track then starts to descend to the ash pit which is just behind the top of the passenger car. There is room to unload 4 cars at a time. The cars are not spotted because of the grade, it is easier for the yard crew just to dump the cars while still coupled to a locomotive. There is a yellow height restriction signs on the support leg on the left. There are also signs further out on the approach track that passes the left side of the tower. There had already been one incident of a transformer on flat car taking out the side chutes. 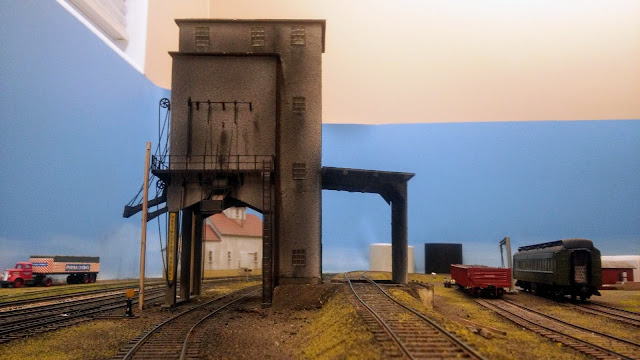 This shows the back side. This picture is very difficult to get when it is in place on the layout. The chutes will go up and down but I do not move them very often as they are very delicate 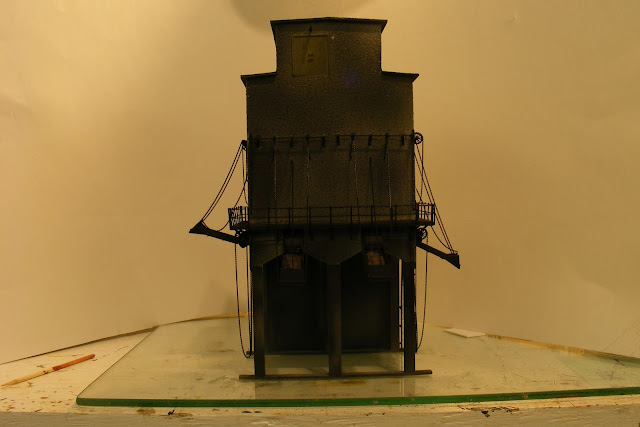 This shows the night lighting 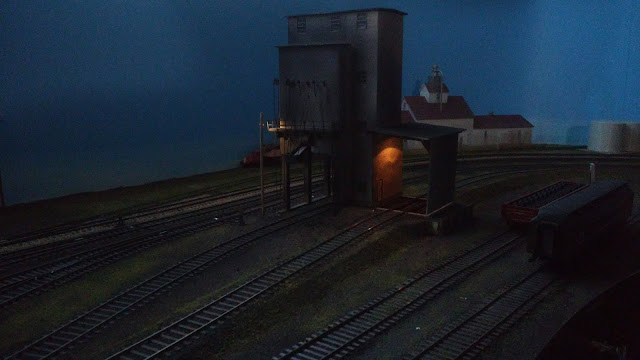 Any questions my email is on the about me page.