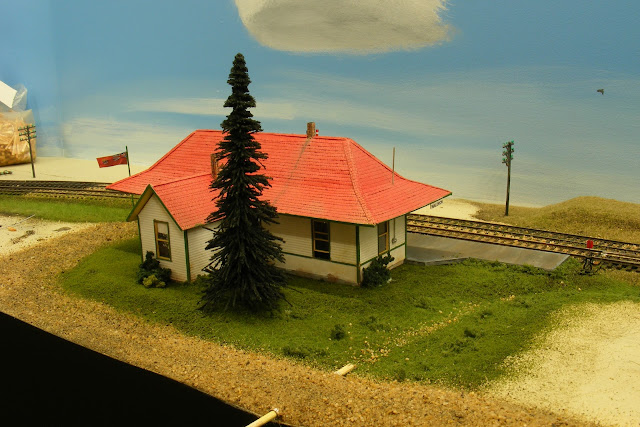 I need 4 more stations for my layout and since the trackage is on old GTP lines I have decided to do 3 E class and one B class. My CNR 2nd class is a divergance from this but I am not sure how much I like the design of the station in Melville. This station is built with 6" drop siding and 2.5" vertical siding on the bottom 3'. The next next 2 I do will be stuccoed. I have a copy of the Canadian National Western Depots which has a one page limited drawing in it. This is a cross between actual plans and a general arrangment drawing. From this I drew up the drawings I used in AutoCad and made more than a few changes through the process. Since I now have access to my friend Ray's laser cutter I decided to laser cut this one and thus the next 3. The most interesting part of this process is how you have to change some of the drawings, especially for doors and windows. There are no commercially made doors or windows that were close to the ones I needed. This also gave me the opportunity to have windows in the open or partially open position. In the past I have just used and modified commercial windows and doors. This time I had to plan out doing the drawings with Rays help. This building turned out to be a much  tougher build than I thought it would be at first glance mostly due to the operator bay, the various roofs and the doors and windows.

Once I had the basic drawing completed I laser cut a cardboard mockup to test how the walls, floor, bay and  roofs would work. It took 3 attempts to get the main roof over the kitchen to be correct. The bay was close and only needed a few tweeks but the roof on the bay took about 6 times to get it right. So I would draw it, cut it out of .04 card stock and then make some tweeks and eventually transferred these new measurements to the drawing and then repeated the process all over again until I got it right. The picture below shows one of the versions of the roof on the building. It also shows the platform which was tapered to fit the track curve on the right end. This is not where the station is going to sit it is just easier to photograph and work with here. 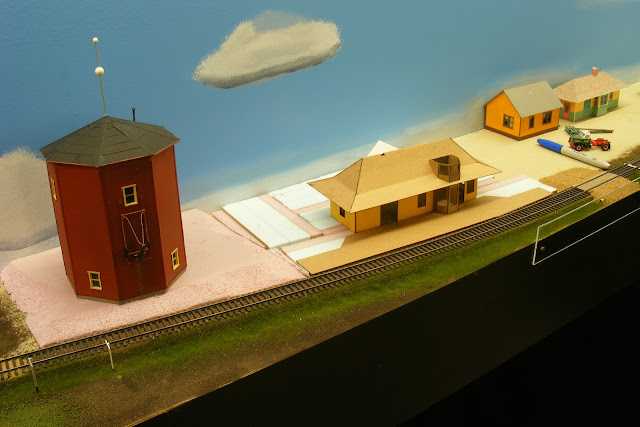 Next came cutting out the styrene pieces. At the top is the platform which is scribed for 8" planks and the inside floor. On the left is all the wall pieces. The thin parts to the right of that are the vertical 3' siding pieces. The parts in the pile on the right are the interior walls. 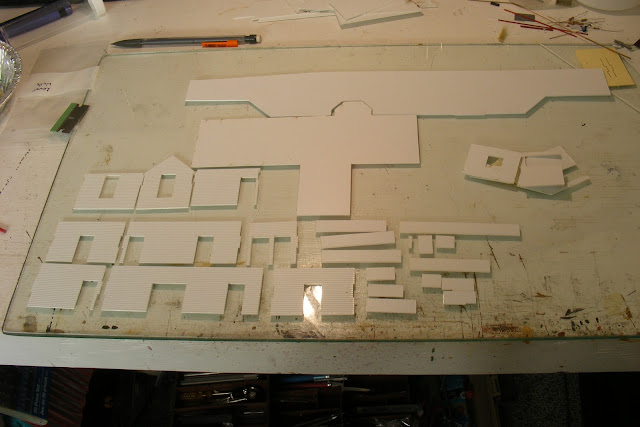 This shows the floor with the board tecture glued to it. Also shown are the bay walls in the middle and a window installed on the entrance wall. 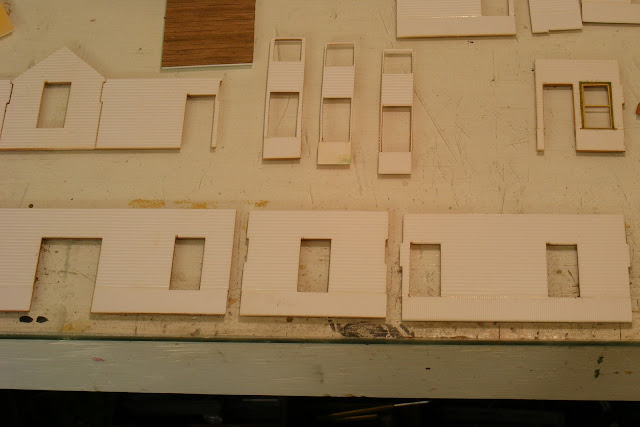 T he picture below shows a better view of the floor with the flooring glued to it, this was something that I had tried a few years back on the deck on a flat car but the textures you can find now are so much better. I imported the texture in to Inkscape and then scaled it and copied and attached panels together so it was long and wide enough to cover the floor. I then printed it out. Next I srayed the floor with 3M glue laid down the sheet getting a leading edge straight. Once this was dry I flipped it over and out off the excess. This picture also shows the window sashes on the left. Under those are  the window sills and trim. The green coloured parts on the bottom right are door trim and treads and trim for single pain windows. Up beside my tweezers is the 5 panel door without the panels in place. The brown curved piece in the middle right is the top of the desk that goes around the inside of the bay walls and just above that are the sashes for a single window. The yellow parts at the top are the roof panels before they are glued to the main roof. The main roof has been glued together and the sheet of paper with the shingle lines printed on it is glued to it. The green thing at the top is the top of a glad ziplock bag that holds some of the window and door parts. 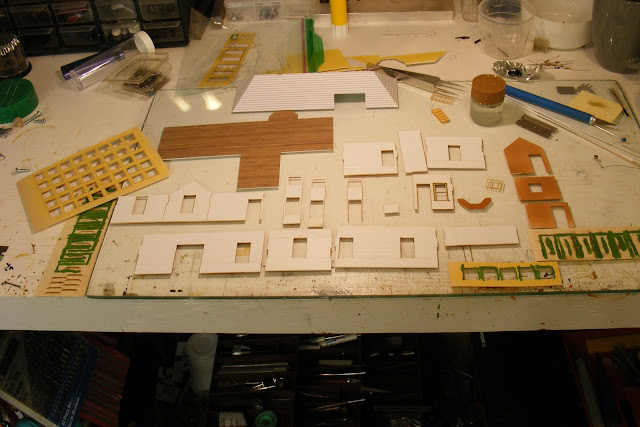 Here the main roof is all together and I am shingling. Three sides are done. The lined paper is created in Cad to fit a letter sized page. The lines are the same spacing that Campbell uses on the their card stock roof panels. I then spray the roof with 3M and attach the paper. The eeve roof panels had the paper applied before I glued them to the main roof. I do not normally do shingles at my desk but on this smaller table that is infront of the TV. I finished the whole  roof during the 3rd round of the Masters. 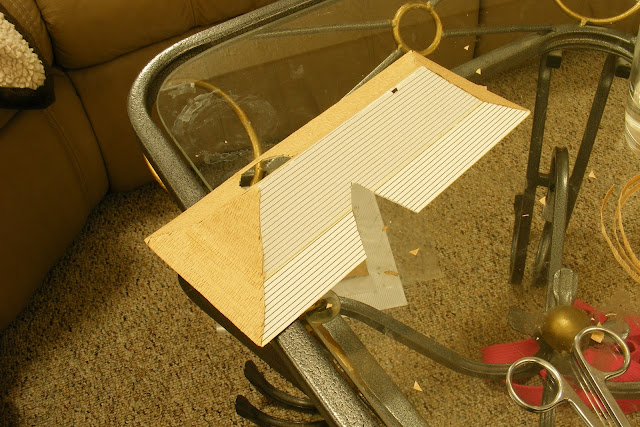 This shows the roof for the kitchen shingled and the ridge cap on. It also shows the shingles on the sheet of wax paper to the left. The wax paper was tapped to a sheet of lined paper and rows of shingles were applied. A book was placed on top to keep them flat. You just cut off a strip about 1/4" wide, remove the wax paper and bend them in the middel with a straight edge and a knife. With this angle they fit the roof nicly. You can also see that the doors and windows have been installed. And the  glass is installed in the doors and windows - which is spread white glue. The trim between the 2 types of sidings has been added. 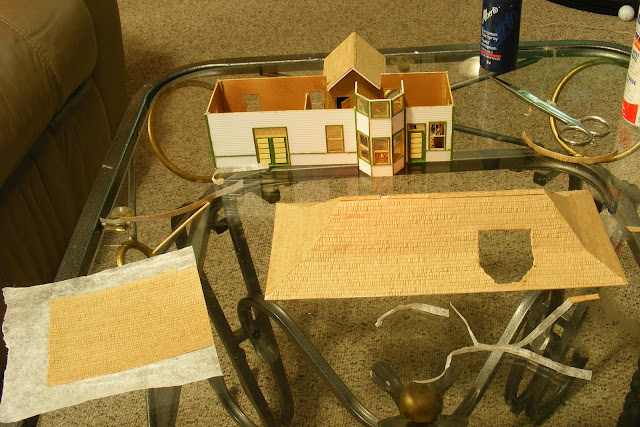 This shows the conpleted main roof with the ridge caps on. 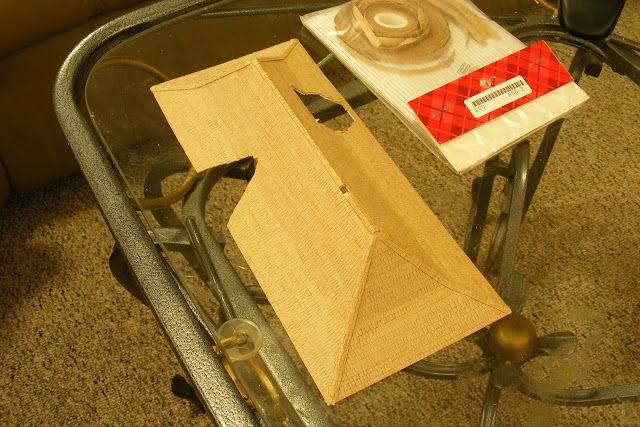 Next the shingles were painted red, then the chimineys were added and everything was weathered and then dull coated. The train order board has been added to the left of the window. It is taken from a picture I have of a real  CN train order board that has been scaled, printed and glued on. Once all the trim was on the bottom board of the building was weathered and dull coated. Then the roofs were installed and the flashing was added. The chimneys were made by gluing brick texture printed paper to a piece of wood that has been cut and a hole was drilled in the end. Theye were then glued to the roof.

This shows what the interior looks like with a  bed in the bedroom. The agent helping a customer at the counter and some people sitting in the waiting room. The tabs on the front wall hanging over are for the outside lights under the eeves. There is an interior light bracket that extends from the tall wall to just over the heads of the people at the counter. The kitchen is at the back and the living room is to the left of the office. You can also see the desk that is attached to the bay wall. 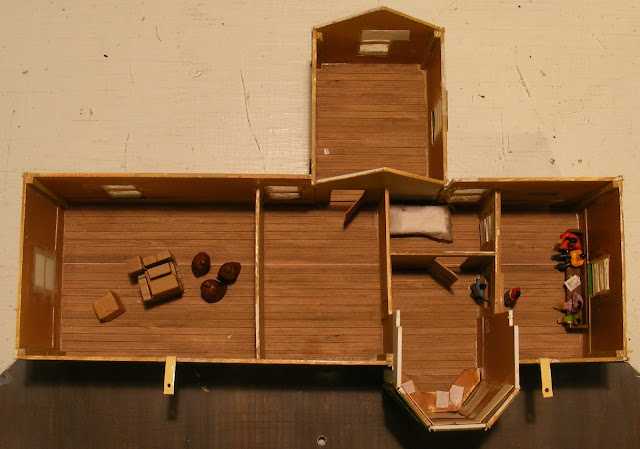 This picture shows the Ensign flag which was printed from a picture I found and scaled down and  glued to the flag pole.  It is just mounted on the platform for this picture when the building is placed it will be in the ground. You can also see the scratch built semaphore that I built. The blades are movable by hand. It does need a ladder. The other detail in this picture is the power connection through the roof and the meter on the wall below. The paltform has been painted to resemble aged wood using the process http://www.pacificcoastairlinerr.com/rough_weathered_plastic/ . The green is CN #12  Floquil (this is not the same as the green #11 that is used on CN locomotives) and the cream is Cat Whisker Yellow from Poly Scale. 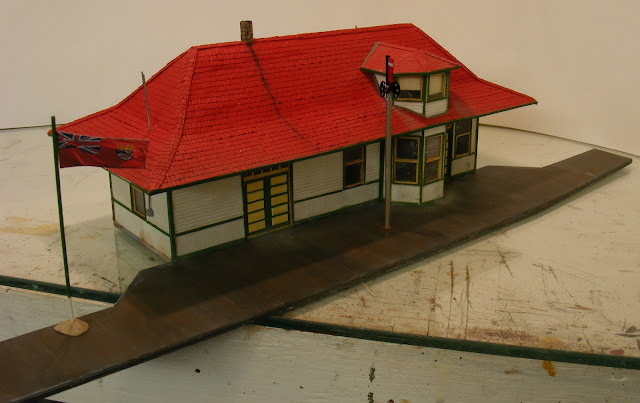 This shows the back side of the structure showing one of the windows in the freight room partly open. 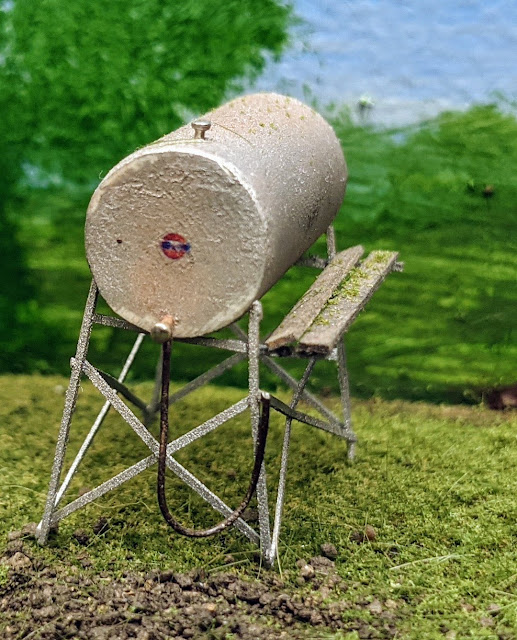