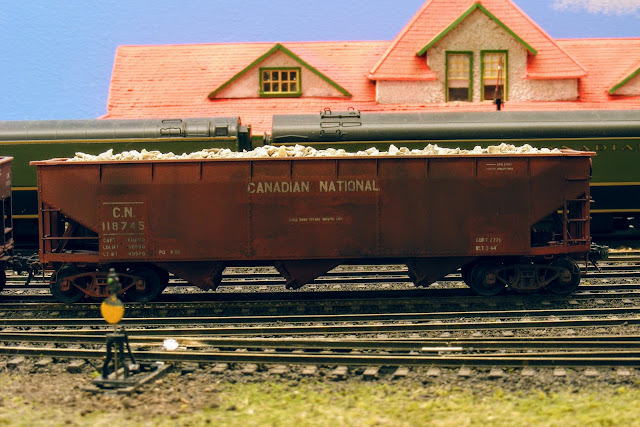 I had a need for another train that didn't interchange cars and is just a through train. This helps to keep the amount of work for the yard crew manageable. I received information from Graham Wood as he was engineer on this particular train that ran between Hudson Bay, Sk and Regina, Sk. The lime stone was used in a cement plant east of Regina.

Here are the Accurail hoppers that I found at Walthers on a sale deal. I had another 3 cars that I had picked up at a swap meet that are not in the picture. I have space to run a 13 car train. 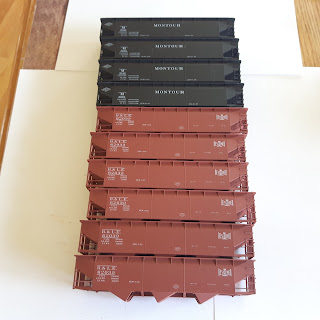 I used my Badger air eraser to remove the lettering off the cars. I do not have pictures of these cars but I have pictures below of other cars I have done. I use baking soda instead of silica in my eraser. It is not harsh or dangerous to the respiratory system. Charlie and I had built a booth that is sealed that I use with the eraser.  The finish from this process is very smooth so re-painting is not a problem. To do either one of the cars below took about 10 min. 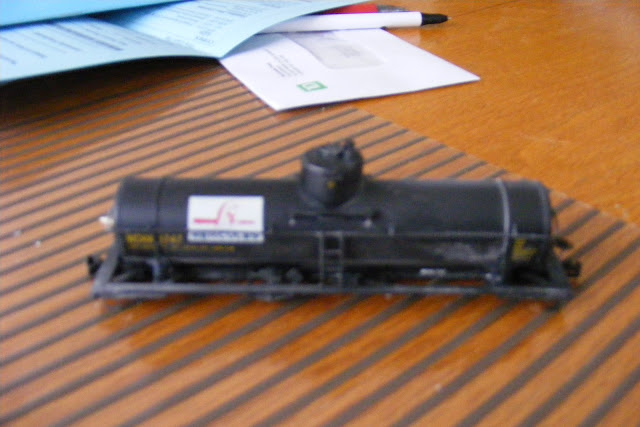 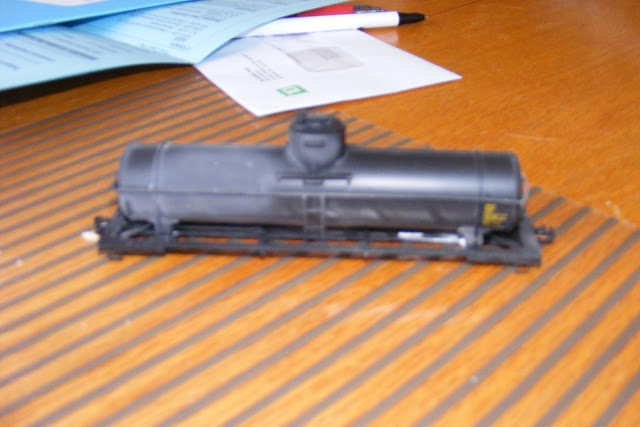 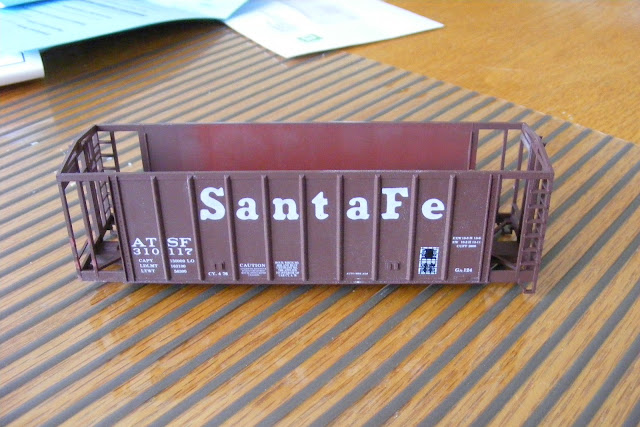 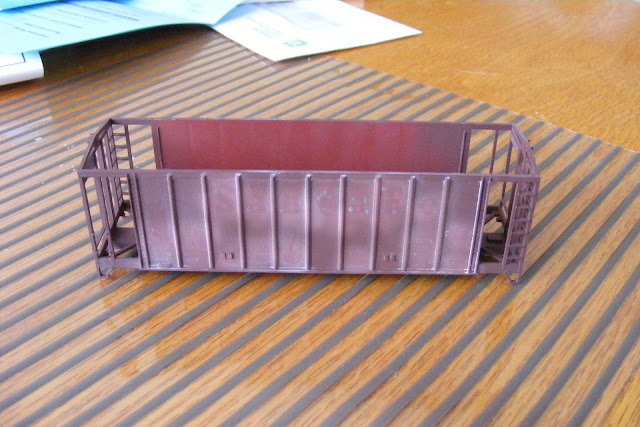 The picture below shows the cars after they have been painted CN red #11. The Kadee #58 couplers have been re-installed. I  cut off the trip pins on all my cars as I have no need for them. All cars get a pair of Kadee air hoses. I could have painted them with the couplers on if I had wanted to as I have a piece of shrink tube that I cut off and slide over the coupler to keep them safe from paint. I chose not to do some of the modifications that were outlined by Stafford Swain's article on hopper cars. 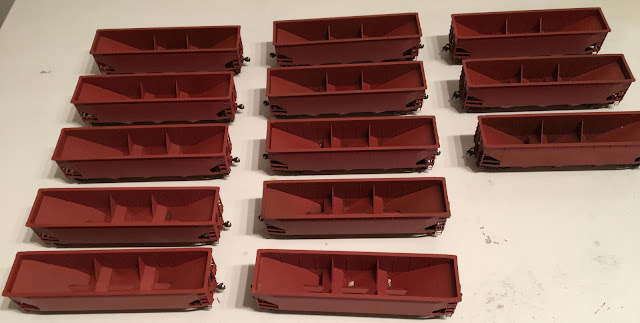 I had custom decals made for these cars  by William Bellandger from Manitoba. The good part of having the decals made was I could change the size of the CANADIAN NATIONAL, built dates, re-weights, coal and stone levels and car number and data that was unique to each car. This made decaling the cars very easy. Took a little more time to set it up and check that they were correct before they were printed. As a result it only took about 15 min to decal the side and one end of a car because of the work done above. The cars were then weathered inside and out with chalks and then a shot of acrylic dull coat. The trucks were reinstalled with new code 88 metal wheel sets.

Below are pictures for the loads. I ripped 1/8" hard board through my band saw and then cut them to length and trimmed the corners to fit the hoppers. Each piece was test fitted inside a car to ensure that it would go in and out without sticking. I then glued on 1/4" super magnets in the center. They are only an 1/8" high so they are easy to cover. They are laying on my garage floor in the sun letting the glue set. 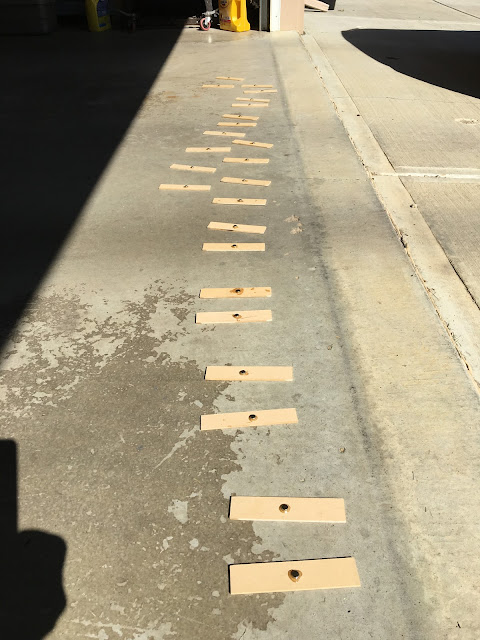 I then laid down a garbage bag on the floor and painted all the load boards and magnets black. Just using a can of flat black paint.

Here you can see the lime stone glued to the board. I took real lime stone and put it in a bag and smashed it with a 4 lb hammer  to crush it down to size. The size of the crushed lime stone was up for debate but it looks good at the size it is. I then screened it. I had to pick out some of the larger pieces because I didn't have a screen size that would work. Still on the garage floor I poured the crushed stone on to the boards until I was happy with the load shape. I didn't worry if stone was on the sides of the loads, as I had done a test with my coal loads and found it is easy to break off anything that gets stuck to the side. I then sprayed them with water with a little alcohol in it and then used diluted white glue to glue everything down and left them again in the sun to dry. Once they were dry I broke off the stray pieces from the sides and then sprayed all the loads with a dull coat. To remove the loads from the cars I use one of the extra magnetic wands that I have from Rapido passenger cars. I used the same process to build my coal loads by just substituting stone for real coal.

Here are some pictures of the cars. Normal power for this train for now is 2 GMD1's and 1 GP7. This train leaves from Regina and goes on the Qu'Appelle sub to Melville and then on the Yorkton sub to Yorkton and on to Hudson Bay where it gets loaded and then returns back to Regina and is then interchanged out to the cement plant east of the city.

Below are pictures of the train.