I have just bought a Full Spectrum Muse Core laser. I will take you through the process of picking this machine and the criteria I used. The first few days I had it were a bit overwhelming and I will explain some of the help I received to get it up and running.

The tube on the wall behind the laser has nothing to do with the laser per se - it is the vacuum header for the whole work bench. The shop vac is on the floor at the end of the bench. 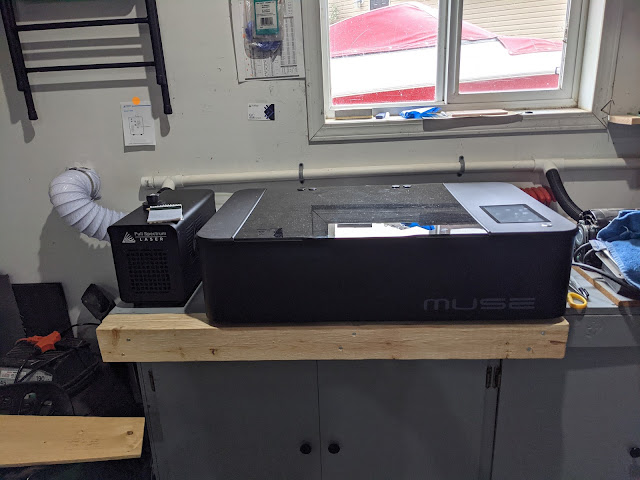 I already had the ability to run an Epilog Fusion so I understood a lot about laser capabilities. Having said that I still learned many things while researching this brand. I did not want a Chinese  machine that you would have to do a lot of tinkering with to get it to run even if it was cheaper. I would have liked to support a Company with Canadian offices but that would have limited the choices to just Epilog and Dremel. You may see a Canadian presence but the more you research it you see they are supported from the USA. I also knew that turning it into a business was not my top priority. I did consider how it would handle work if I started to do business work with it. I spent 8 months from when I started thinking/researching until I made a purchase. When you look at reviews for this company there will be noted differences if the review was made before 2019 as there was some company changes made after that time. I then found a You Tube channel called Steve Makes Everything.  You really, really need to go and watch his videos especially if you have not run a laser before. He has a lot of excellent information and I was able to Zoom with him. He was nice enough to do a cut for me of a diamond harrow in HO scale. This was my test against this machine and the Epilog. The dimensions in the drawing below are 1:1 so divide by 1:87 to see how small it is when cut. 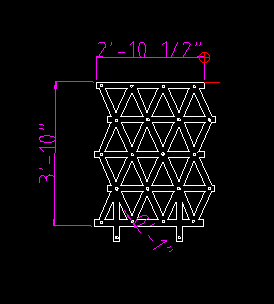 These were cut on the Epilog 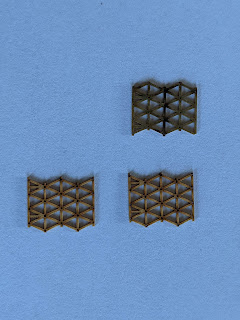 These were cut on the FSL that Steve did for me.  I had told him it could be quick and dirty. I am happy with how well the FSL cut them. These are the tiniest thing he has cut. He said he could have done better if he had aligned his machine first. 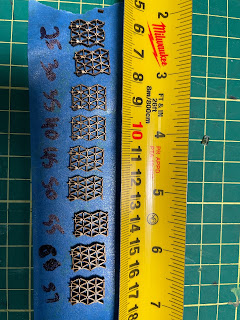 -what options I really needed, camera, rotary attachment could they be added after. So I can get the riser and the rotary attachment, different length lenses. I can't add the camera in the future but I just didn't think I would get enough bang for the buck considering I am not going straight into business.

-after purchase support I guess time will tell but Steve has been happy the couple of times he needed support. There are tons of reviews on all the brands but it not easy to tell just from this.

-operating system they all have something different so you have to look at them all to see which ones you think you would like. The Glowforge is 'cloud based' so all your work lives on their server. If it gets busy you may not be able to print a job until you move up the que They have a fix for this but it is a yearly fee.

-file formats that can be used now most operating systems will accept a lot of file formats but you should make sure they have the ones you need.

-bed size and depth you will see in the chart that some have more depth than others or like the FSL you add an extension to the base to cut bigger material. Some have smaller and larger bed sizes.

-weight as you will see in the chart, there is quite a difference in weight but I really wanted something 2 people could move easy like 50lbs not 250lbs

-replacement laser tube cost this can also vary a lot. The Glowforge is expensive because you have to send the whole machine back to Washington to get a laser tube replaced.  Not convenient from Canada.

-owner manuals for just about all my purchases I like to read the owners manual before I buy them.  I do not rely on the sales pitch that may glaze over important info.

Here is the link to the table I created Table Comparison.  The Muse 2D is in red because just as I had decided to pick this it was no longer being sold. ARRR! So I moved down in price to the Basic, always good to save more money.

I waited until it was shipped to see exactly how it would fit on the bench. Once I had it all unboxed I placed it on my bench. My bench is 24" wide and I also needed to see where the vent would go. I added 2 - 2x4's to the front of the bench to make it wider and drilled the 4" hole for the vent line to the outside.  In the future I might add another 2x4 to make that portion of the bench wider yet. I also had to get new stands for my bench grinder and my vise as I have run out of room on the bench. My lathe sits to the right of the laser under the towel. There will also be a towel to go over the laser to keep it clean. The garage in the winter is kept between 12-14C. 14C if I am going to be out there for a long time. I also bought a jug of Ethaline Glycol to mix with the distilled water that is in the Cool Box (on the left side of the laser) for cooling the laser tube. I mixed this so it is good to -25C  just in case the power goes out or if the furnace quit because the laser tube is glass and can't be frozen.

I was finally ready to turn it on. I connected it to my WIFI network and then connected it through Google on my laptop so that I could ensure I had the operating program functioning. Next was to run a test to check the mirror alignment. It was not aligned so I had to go through the procedure to realign the mirrors. This problem can  occur due to rough handling during shipping. I didn't think the procedure looked too hard but it turned out to be a little difficult. It took me 3 tries to get it right and I had to bring in Brian to ensure I was not missing anything. I had run out of the thermal paper required during this test as they do not send much with the machine. I then had to wait a couple of days for that to come, but now I have enough for life for $20. I also bought a 3" mirror that can stand up on the bed so I can see the burn marks on the paper easier and cut a piece of card stock so as to block the red beam indicator if needed so I can see the burn marks better also. It will be easier from here on in now that I have these tools and understand the process better.  All lasers need this mirror adjustment completed from time to time. I then had to align the gantry as it was out by .5" on one side, easy enough to do. FSL has videos that show how to align the mirrors and gantry. This all took me a week but I had other things to do like baby sitting, pickleball, a couple of Zoom meetings and getting ready for winter. I knew when I ordered it that I would not be cutting the day it arrived. HAHA 😉 but now I am ready to run a project. This will be covered in my next post.

Note:  When I was setting up the laser I was keeping things neat using zip ties to tie up cords. I also shortened the water line hoses that go between the laser and the Cool Box which made sense at the time. The part I missed was when I need to drain the water system my hoses will be a little short to drain to a pail. Have to resolve this at some point but not right now.

Email ThisBlogThis!Share to TwitterShare to FacebookShare to Pinterest
Labels: Tools 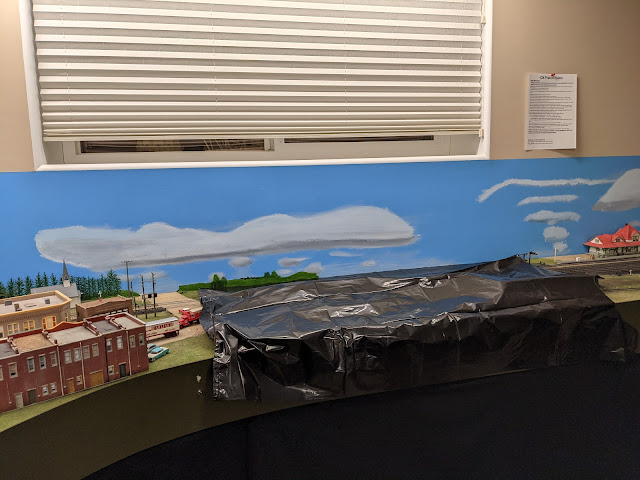